Pigments are an integral part of the work of the restorer of works of art: they are one of the main constituents, together with the binder, of the pictorial films stretched by artists to give life to their works, whether they are painted on canvas, polychrome wood sculpture, sculpture in polychrome stone, fresco or dry wall paintings. The pigments are also used for particular techniques such as the Italian technique of scagliola. In this technique, the pigments are mixed with chalk and animal glue to produce pastes that are used to make fake marbles. Pigments are also very important to produce one of the main tools in the restorer’s work: retouching colors (watercolors and varnish colors), see my article on retouching colors.

But what are pigments?

There are also dyes, transparent substances which are used for coloring, after being absorbed by inert and colorless powders or gels, sometimes translucent. In this way, the dye is converted into pigment.

ORGANIC carbon (C) + hydrogen (H) pigments are generally colorants and are of both animal and vegetable origin.

INORGANIC PIGMENTS: they are generally of mineral origin, they have a crystalline structure (eg: carbonates, chromates, phosphates, sulphides, silicates, oxides);

They come in the form of:

An example of earth is Van Dyck brown which takes its name from the painter Antoon van Dyck, who used it extensively in his paintings. This brown is usually made from a mixture of natural and calcined earth and mainly contains iron oxides.

Very dark and intense brown in color, tending to blackish, this inorganic pigment has always been widely used in a large number of techniques (oil, watercolor, tempera, etc.).

MINERAL PIGMENTS: these are obtained from the grinding of minerals, and further processed;

There are also SYNTHETIC PIGMENTS, produced in the laboratory since the 18th century. 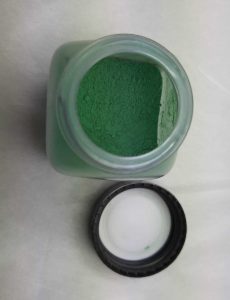 Artists have always produced their colors as an autodidact, carefully choosing the purest pigments, which were ground in the workshop and mixed with binders and drying additives that were kept secret. From the middle of the 19th century, the appearance on the market of ready-made tubes greatly facilitated the work of the artist, especially those who practiced painting outdoors. But some artists still prefer to produce their own colors today, and in the same way, some restorers produce their retouching colors, in particular to be sure of their composition.